Two persons have been reportedly burnt to death while three others sustained injuries as a petrol-laden tanker exploded at Ilo Awela axis, Sango Tollgate, along… 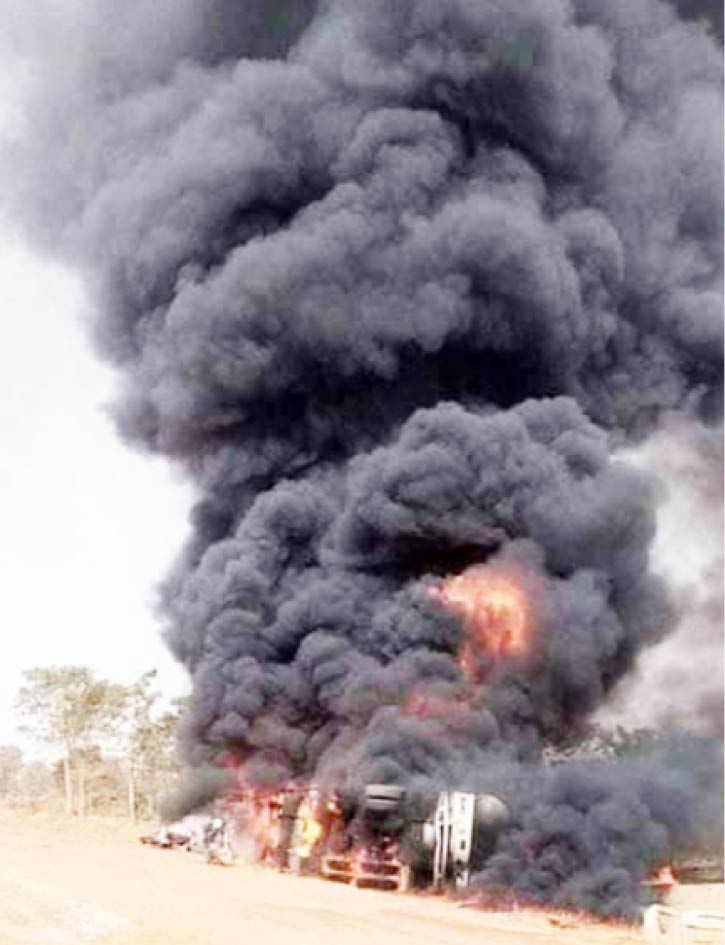 Thu, 6 Oct 2022 10:03:53 WAT
Two persons have been reportedly burnt to death while three others sustained injuries as a petrol-laden tanker exploded at Ilo Awela axis, Sango Tollgate, along the Lagos-Abeokuta Expressway.
At least 12 vehicles were also said to have been razed during the explosion which occurred early Thursday morning.
It was gathered that the tanker was  ascending the Ilo Awela slope adjoining the expressway when it fell and went up in flame.
The spokesman for the Federal Road Safety Corps (FRSC), Ogun State Command, Florence Okpe, confirmed the incident to newsmen in Abeokuta.
She noted that the suspected cause of the crash was mechanical fault, saying that while the tanker was ascending, the vehicle rolled back and got hooked, making the content to spill and leading to a fire outbreak.

She said, “FRSC  carried out a rescue operation at about 1:30 am on Thursday involving a tanker laden with PMS (petrol) while ascending Ilo Awela slope adjoining Abeokuta-Lagos section of the expressway. It fell and went up in flame.

“Men of the fire service were contacted immediately and the area was cordoned to prevent a secondary crash.
“As at 4: 05am  a total of 12 vehicles were involved which comprised three luxurious buses, four tricycles, three motorcycles, one yellow bus and a Tanker.
“A total of three persons were rescued to Ota General hospital (two male adults and one female adult) seriously burnt. Two bodies burnt beyond recognition have been evacuated from the scene.”