2 arrested for attempting to disarm policeman in Lagos

Two suspects were on Sunday arrested for trying to disarm a policeman at the Mairan area of Lagos. Video footage of the incident has been… 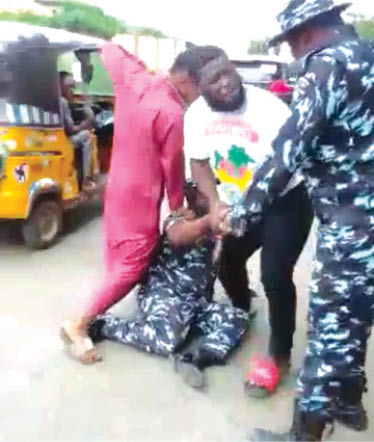 The suspects trying to disarm policeman at Meran area of Lagos

Two suspects were on Sunday arrested for trying to disarm a policeman at the Mairan area of Lagos. Video footage of the incident has been trending on social media.

It was learnt that policemen on stop-and-search duty flagged down a car that was conveying the suspects from Oshodi to Abule-Agba and ordered them to alight for the search.

Our correspondent learnt that trouble started when a policeman, after collecting their phones, tried to read the contents of their emails and WhatsApp, which infuriated the suspects, who grabbed the policeman and tried to disarm him.

Reacting to the incident, the Force Public Relations Officer, Olumiyiwa Adejobi, said, “It is a case of assault on a police officer and an attempt to disarm him. A civilian has no right to retaliate even if a policeman slaps him or her. What the person should do is to report any action against them to the police authorities.

“The suspects will be charged to court accordingly.”

On his part, the Lagos State police spokesman, Benjamin Hundeyin, who did not reveal the identities of the suspects on his Instagram page, confirmed that the incident occurred at Mairan.

He wrote: “Investigation is on and the outcome will be made public.”