Nigerians woke up on Monday to the news of Oluwatobi Amusan making history by becoming Nigeria’s first-ever gold winner at the World Athletics Championships. 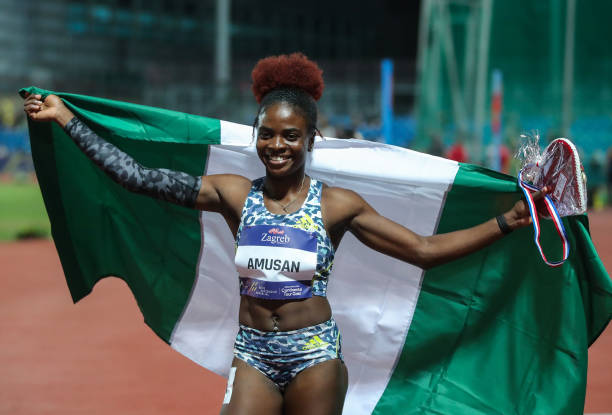 Nigerians woke up on Monday to the news of Oluwatobi Amusan making history by becoming Nigeria’s first-ever gold winner at the World Athletics Championships.

Her performance came 90 minutes after she set a record time in the semi-finals with 12.12 seconds, which broke the 12.20 record of America’s Kendra Harrison, who finished behind Amusan in second place.

Amusan finished in 12.06 seconds in the final which would have broken her new world record, but her new record was ineligible as the wind speed was over the legal limit.

This is not her first medal in international meets. She has been making exploits for a while. However, many analysts believe she was being overshadowed by other Nigerian well-established athletes.

Below are 16 things you should know about her exploits before now:

1. Amusan was a silver medallist at the 2013 African Youth Championships in Warri.

2. She also claimed gold in the 100 metres hurdles at the 2015 African Junior Athletics Championships in Addis Ababa

4. In 2016, as a freshman a the University of Texas at El Paso (UTEP), Amusan became the second athlete for the university to be named C-USA Female Track athlete of the Year since UTEP joined C-USA.

5. She was the gold medalist in both the 100 mH and the 200m. She also claimed a silver in the long jump at the C-USA Championships.

6. Amusan first broke the 13 s barrier in the hurdles with a time of 12.83 s at the El Paso UTEP Invitational. This eclipsed Kim Turner’s 100 mH UTEP record which had stood for 33 years.

8. She was the C-USA champion in her specialist event and also the runner-up in the 200 metres.

9. At the 2017 NCAA Outdoor Championships, Amusan claimed the title ahead of Camacho-Quinn who was the champion the previous year. She did this in a personal record time of 12.57 s.

10. At the 2018 Commonwealth Games in Gold Coast, Australia, 2015 World Champion, Danielle Williams seemed to be the favourite to take the title in the absence of Sally Pearson. In the final, however, Amusan moved ahead of her competitors and won the race by a clear metre ahead of Williams.

12. At the 2019 World Championships in Doha, Qatar, she ran a personal best of 12.48s during the 100 metre hurdles qualifying rounds. In the semi-finals the following day, she equalled this personal best before placing 4th a few hours later in the final with 12.49s.

13. In 2021, Amusan finished fourth in the Tokyo Olympics with a time of 12.60s. She later competed in the Zurich Diamond League event, which she won in 12.42s, becoming the first Nigerian to win a Diamond League trophy.

15. She won gold in the 100m hurdles at the 2022 African Championships in Mauritius, defending her title successfully with a time of 12.57s ( wind-aided). She also competed in the women’s 4×100m and won gold.

16. Later in 2022, she competed in a Diamond League meet, finishing second with a time of 12.60s, behind Olympic champion Jasmine Camacho-Quinn.