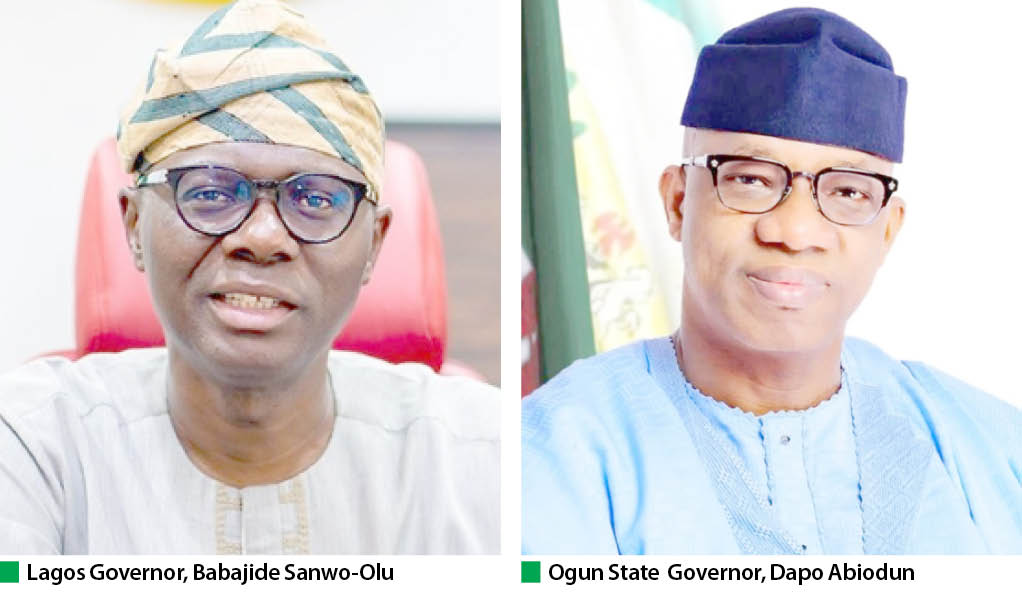 The formation of the Lagos/Ogun Joint Development Commission by the governors of Lagos and Ogun states was seen as a game changer for the development of the two states, but residents said they are yet to see the benefits of the partnership.

In May 2021, Governors Babajide Sanwo-Olu and Dapo Abiodun of Lagos and Ogun states respectively, signed a Memorandum of Understanding establishing the Joint Development Commission. This was a move applauded by all and sundry, especially residents of the two states.

This was due to the interconnected nature of the two states bonded by culture, language, geography and urbanisation challenges. Both states are seen as siamese twins and so many people believe it was natural for the two states to work together.

At the MoU signing, the Ogun governor stressed that Ogun State has a larger percentage of the population over-spill from Lagos State as witnessed in many of the border communities like Ota, Akute, Alagbole, Lambe, Ojodu; Agbado; Mowe; Marewa; Isheri; and indeed all the eight local government areas that share boundaries with Lagos State.

Sanwo-Olu on his part recalled the historical emergence of Lagos as a megacity with a population of over 22 million people and what the state government has done to realise its dream towards expediting action for greater synergy with other states, especially Ogun for sustainable socio-economic development.

He, therefore, described the MoU as a “game-changer” that would transform the urban agglomeration that Lagos State had attained.

Sanwo-Olu said, “In the light of the current global best practices, it has become imperative that the best way to accelerate socio-economic development in Lagos and Ogun states is by embracing a more collaborative approach for growth, development, and urban sustainability.

“The Joint Memorandum of Understanding (MoU) is a sustainable development agenda under which Lagos and Ogun states will combine resources to meet our present socio-economic needs and prepare for the future.”

15 months after the commission was set up, residents of both states are still awaiting the benefits of the joint partnership and what they stand to get in terms of infrastructural development, especially of the border communities.

As observed by the two governors, the states have become so intertwined with many people who work in Lagos residing in neighbouring Ogun towns and villages including Ota, Akute, Alagbole, Lambe, Ojodu; Agbado; Mowe; Warewa; Isheri; Arepo, among others.

One challenge that has plagued the people living in Lagos-Ogun border communities is the dearth of infrastructures especially roads within the various communities.

Even the commercial motorcycle operators popularly known as Okada riders are not finding it funny as well.

A commercial motorcycle rider who identifies himself simply as Dairo said “My brother, we are suffering here even as Okada riders. It is not only the motorists that are suffering and cannot use their vehicles. Whether you are a commercial driver or private, it is risky to bring your car here.”

Another resident of Ifo, who is a civil servant in Lagos, in a chat with our correspondent said they had envisaged that the joint pact would have brought some succour to them in terms of fixing the developmental deficits in the Lagos-Ogun border communities but nothing much has been done.

Both states yet to send Bills to legislative house

Following the signing of the MoU between two states, they are expected to send Bills to their respective Houses of Assembly to give the terms of agreement legal backing.

But checks by our correspondent showed that the two Houses are yet to receive any Bill on the commission’s terms of reference.

A source in Lagos House said, “We are yet to get any Bill on any commission.”

In Ogun State, our correspondent reports that except for the Memoranda of Understanding (MoU) recently signed by the two states on the 31-killometre redline passengers rail service from Oyingbo, Lagos State to Agbado in Ogun State, not many gains have been recorded on the much-touted development commission.

After signing the MoU, the governors said the next step was to establish a joint committee that would implement the terms of the agreement and formally send Bills to Houses of Assembly in both states to generate statutory support for the establishment of the economic integration commission.

Findings by our correspondent revealed that Governor Abiodun has not forwarded the proposed legal framework to the assembly.

Last December, Ogun and Lagos State governments were locked in controversy over the ‘demolition’ of about 1,000 houses and shops in their border communities to give way for the construction of the Rail Mass Transit project by the latter.

Our correspondent gathered that a notice of demolition was served by officials of the Lagos Metropolitan Area Transport Authority on residents of Itoki, Agbado and Ijoko in the Ifo Local Government Area of Ogun State.

The affected areas are in the border communities of both states.

The notice was signed by the Managing Director and Chief Executive Officer of LAMATA, Mrs Abimbola Akinajo, and addressed to one of the landlords in Agbado.

Based on the removal notices, about 1,000 houses will be affected.

The notice stated in part, “In order to establish the Right of Way for this proposed development, houses and businesses will be affected.

“Therefore, this letter serves as a notice to inform you that your property is likely to be acquired in overriding public interest.”

However, the Ogun State House of Assembly declared the removal notice as “null and void.”

On infrastructure, Ogun has completed the 14km Ijebu Ode-Mojoda-Epe Road that links the Lekki / Epe corridor of Lagos State to the eastern corridor of Ogun State at Ijebu- Ode. The project, however, predated the MoU signed by the two states.

Moreover, larger number of roads within Ogun and Lagos border communities are in deplorable state. Some roads in communities linking Lagos and Ogun State have been neglected before now, leaving residents in untold woes and hardship.

Navigating Ogun State from Yakoyo to Alagbole, Akute, Ajuwon, Lambe, Oke Aro, among others is not only tough for motorists but even the commercial motorcyclists, popularly known as Okada, who populate the axis.

The Chief Press Secretary to the governor, Kunle Somorin, listed construction of inter-state roads, BRT lanes for Gateway buses, security joint border patrols and the agreement reached on multi-modal transport system – Redline train lines to Agbado Station and Blue line going to Agbara, as some of the gains of the joint commission.

Somorin did not agree that the commission had not made meaningful progress, saying “We have moved from the drawing point to activating the plan.”

“Everything is being systematized. It won’t happen overnight. Cynics always look at the dark sides but these two governors are futuristic.

“Don’t forget that the plan that has now been activated has been on the drawing board for over 15 years. Prof Mabogunje who headed the original plan is dead.

“It’s evolving in the fullness of time and the impact will be better felt. There’s a will and definitely there will be a way,” he said.

Somorin added “Ogun-Lagos collaborative framework is worthy of emulation. The states – Ogun and Lagos – are positioning to form a thriving economic block that can stand and negotiate its own economic path with the Nigerian federation and other states of the country, and even with other nations.

“A close look at the concentration of industries in Nigeria clearly shows that Lagos and Ogun states are in a league of their own. Data on Foreign Direct Investment into the country confirms this fact in numbers. The governments of these states know this, and are both actively trying to widen that gap between them and the others, thus positioning themselves as the most preferred location for industries in the country.”

Both states working on the joint commission – Lagos Commissioner

On his part, the Lagos State Commissioner for Information and Strategy, Mr. Gbenga Omotoso said both states have done a lot as regards the joint development commission.

In the area of security, he said that “Recently, when people said something was happening on the long bridge, Lagos State government moved in and joined hands with Ogun State to fix the security challenge.

“The two states are also discussing the road from Ijebu-Ode to Epe on how to ensure that the road is put into the best of use. So also, all the roads connection Lagos and Ogun state.”

The commissioner further noted that the two states are cooperating on the Adiyan Water Works that Lagos State government is banking on to have 70 million gallons of water per day. He disclosed that Lagos State government has paid compensation for some houses that will be demolished, noting that there are some people along the pipeline who said they do not want money but would like to partake in the water scheme whenever it is ready.

On the damaged portions on the Lagos/Abeokuta express way, Omotoso said the expressway is a federal government road. “Though recently, Ogun State government said it was taking over repair of the road, so that it can be motorable,” he added.

A public affairs analyst, Prof. Sylvester Odion, advised that there was no need for the two states to delay the implementation of the terms of agreement of the commission.

He said, “Truly, it is a brilliant idea.  Intention is one thing, implementation is another. I think commitment is a hard currency in government circles in Nigeria.

“There is no need for delay because Lagos has in reality merged with Ogun State being its most contiguous neighbour. They should prioritize certain issues, especially accessibility, that’s road infrastructure and intelligence sharing on matters of security.

“The chief executives of the two states should take a break from election preoccupation and breathe life into the joint commission.”