14 years after concession, a glimmer of hope for Kano dry port

Over 14 years after the signing of the concession agreement and well over the 30 months planned for construction works, the Dala Inland Dry Port… 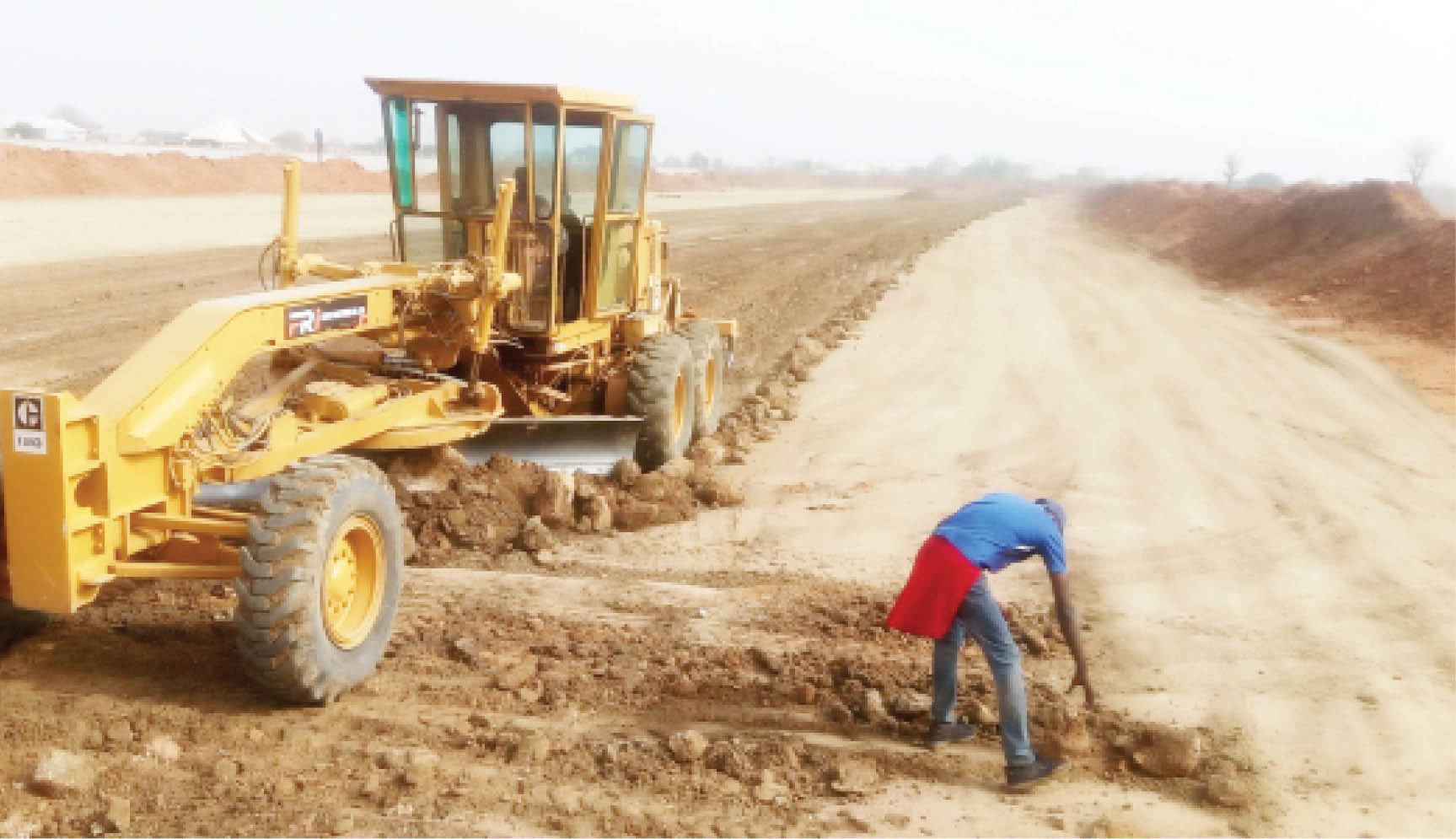 A quarter of the stacking area is what is being done at the moment. This is an area where the containers that arrive the port would be stockpiled Photos: Clement A. Oloyede

Over 14 years after the signing of the concession agreement and well over the 30 months planned for construction works, the Dala Inland Dry Port is gradually taking shape but needs the Lagos-Kano railline, to become a reality.

However, even when it becomes a reality, with the completion of construction works towards the end of the year as projected by its concessionaire, the port will still have a major challenge – the Lagos-Kano rail, which has only been completed up to Ibadan, Oyo State.

Dala is one of the inland container depots approved to be setup in various parts of the country by the then administration of President Olusegun Obasanjo, with emphasis on areas lacking seaports.

The project is a 20,000 twenty-foot equivalent unit inland dry port for transport and logistics zone on a Private-Public-Partnership (PPP) scheme, which was initially conceptualised as concession-based, where the government was to build, equip and appoint concessionaire to man, operate and render returns and eventually return the project to the government for other terms to be reviewed.

But long before 2003, the background work for the project started in 1999 by the eventual concessionaire before the Nigerian Exports Council in 2000 commissioned a Germany-based consultant to undertake a study for the establishment of inland dry ports in Nigeria. That study submitted its report in 2002 and the Council approved the concept with six pilot projects, one of which was to be situated in Kano.

It is situated in the Zawachiki area of Kano on 200,000 hectares of land, out of which 35,000 hectares for the inland dry port alone, while the remaining 165,000 hectares is for the special economic zone, which is going to have companies that would be engaging in parcel processing and processing cargoes for export.

Between 2003 and 2006, the policy was changed by the then President Obasanjo from the turnkey arrangement to a build, own, operate and transfer model of the PPP. This means the appointed concessionaire is going to build the port, manage it for a period of time, render returns to the government and return the project to the government after the expiration of the agreement.

When the policy was reviewed in 2006, Dala again went through the bidding processes and was reconfirmed as the preferred concessionaire, upon which a concession agreement was signed in May 2006.

30 months for completion of construction

In the concession agreement signed in May 2006, the Federal Government was expected to, among other things, give the concessionaire the title document for the land, declare the port as a place of origin and destination and perform other facilitations to enable the concessionaire access funding and partner with other stakeholders across the globe.

The agreement similarly provided 30 months for completion of all construction works, which meant that by the terms of the agreement, construction work on the land was expected to have been completed by November, 2008; but the work only started in late 2020, over 140 months after.

The reason for this delay, according to Ahmad Rabi’u, the managing director of Dala Inland Dry Port Nigeria Limited, the concessionaire, was that at the point of signing the agreement, government could not provide the title document to the land, which naturally made it impossible for the concessionaire to begin.

“We were told it would be done soon,” he said. But it took many years before it came.

“We got the title documents after 31 months; that is in December 2008. We were supposed to have finished construction within 30 months of signing the agreement, but if you have no title, that is, no certificate of occupancy, you cannot do anything,” he added.

By the time the firm eventually got the title documents for the land, Rabi’u said most of its foreign partners had left when they saw that it was hopeless and real action was not coming. “We had partners from India, Port of Newark and New Jersey, China and Singapore,” he said.

Despite accessing the title documents, construction work on the land was still not forthcoming until 10 years later. This was because, according to the policy, the role of the state government in the project was to provide the required land to the Federal Government and to provide access to the land, which means the provision of road network, light, water and other amenities.

But the state government only took interest in the project in 2018, which has now yielded the results of the ongoing construction of access road and the fencing of the perimetres of the 35,000 hectares, which started late 2020.

During a visit to the project site last week, contractors were seen working on the culvert for the dualised access road. Workers were also seen working on the perimetre fence, as well as the stacking area and administrative block and the warehouse area.

One of the workers on the stacking area told Daily Trust on Sunday that they had been on the site since December and hoped to deliver the area by the end of the month, with construction of internal road networks, while staff quarters and public areas would follow later.

With the commitment of the state government, Rabi’u said, “Everybody is now seeing Dala as a reality. The governor, beyond doing what he is doing on provision of the critical infrastructure for the facility, has also given us commitment that any time there is anything for him to help us follow up with the Federal Government, he is ready.”

We have invested N2.3billion in the project – Ganduje

To prove his commitment to the project, Governor Abdullahi Umar Ganduje led the concessionaire on a visit last year to the Nigeria Export Council in Lagos, as well as Sifax, one of the port operating companies in that state.

It was at one of such visits to the Nigerian Shippers’ Council headquarters in Lagos that the governor first revealed that his administration had injected N2.3billion into the project.

The governor had stressed that the government of Kano State was ready for the takeoff of the project, reiterating that the port was created to boost Kano State’s economy and that of Nigeria in general, as well as boost regional trade of other West African countries.

During the meeting, both parties admitted that the establishment of a dry port in Kano was long overdue because of the economic significance of the state, its strategic position and the strategic link it would provide to trade development within northern Nigeria and other Western African countries.

Benefits of the project

The port, according to business analysts, has the potential to reduce the cost of doing business in the state, as well as the generation of millions of dollars in terms of revenue to the state’s coffer, as it will be leveraging on the role of the state on the frontier markets in Nigeria.

On completion, the project is expected to be a critical component in the takeoff of the Special Economic Zones initiative of the Nigerian government in the North-West geo-political zone of the country.

Late last year, a delegation of the Federal Ministry of Transport, led by Magdalene Ajani, a permanent secretary in the ministry, was in the state to inspect the project as part of the preparations for the takeoff of the implementation of the African Continental Free Trade Area (ACFTA) agreement.

This reiterates the hope of the Federal Government in the project, which it believes when completed would be germane to a successful implementation of the ACFTA agreement, which Nigeria is a signatory to, that became operational this month.

Specifically for the people of Kano, the concessionaire believes the project would bring improved efficiency in the import and export of cargoes “because the time it takes for a cargo to get out of Apapa port and get on the road by truck is about six to seven days. From that point, to get to Kano takes about two weeks.

“When a cargo comes by road, it goes through our bad roads and suffers the risk of shifting. And most of the time they arrive here with damages. We were told that one out of every 20 containers falls by the way. This improvement in efficiency and reduction in cost is going to be a big boost to Kano economy,” he said.

Similarly, export cargoes can now be packaged right here in Kano and knock out the challenge of exporters having to leave their base for Lagos, which has hitherto discouraged a lot of exporters in the state, especially as it is costly.

This challenge, according to many manufacturers and farmers, is why it is only foreigners with huge capital that are benefiting from the export industry.

“Instead of our people to package the produce from Dawanau (grains market) for instance and process it here for export, they have to take it to Lagos, but when we become operational, this will change as exports will be packaged right here,” Rabi’u added.

With all these, the state government will be able to generate more revenue from taxation; and with more people taken out of unemployment, there will be improved security, he added.

Challenges of the rail project

With the importance of the rail project to the functionality of the dry inland port, Rabi’u questions Federal Government’s resolve to start the Lagos-Kano rail project from Lagos instead of both ends.

“We have been putting pressures because what we know for projects like that is that once they start, they start from the two ends and keep heading to meet in the middle. Regrettably, it started in Lagos and has stopped in Ibadan and we are not happy with that.

Whoever is behind this is an economic saboteur to Nigeria,” he said.

Also, the non-declaration of the port as a place of origin and destination, 14 years after the signing of the concession agreement, is still a source of concern for the concessionaire.

“Despite having the title documents for the land and with some developments on the land, we have still not been declared as a port of origin and destination, but there are some new ports that have done nothing and have been so declared. The Delta port, for instance, was declared a place of origin and destination; and when we inquired, we were told it was done ‘in principle.’

“If the declaration is not made, you cannot market your project, you cannot access funding, and you cannot get into real partnership with foreign stakeholders. They said they wanted us to develop up to 60 per cent before they would declare us, but the Delta port was declared on a platter,” he lamented.

Even with these challenges, the concessionaire is hopeful that the facility would become operational by the end of 2021.

We are also strategising to get into partnerships with other operators in the industry so that we will hit the ground running by the time we commence operation. It will not be the issue of where the cargoes are, but that of growth, leading us to be concerned about expansion,” he said.