The commander of the Intelligence Response Team (IRT) of the Nigeria Policd, DCP Tunji Disu, has won a silver medal in a Judo competition in… 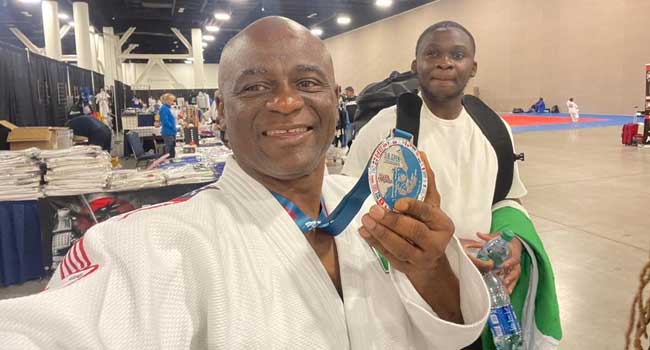 IRT Commander, Tunji Disu, displays his silver medal in the US Open on July 31, 2022

The commander of the Intelligence Response Team (IRT) of the Nigeria Policd, DCP Tunji Disu, has won a silver medal in a Judo competition in the United States.

Disu won the medal in the 33rd US Open taking place in Brookline, Massachusetts.

Here are 10 things you should know about the super cop making Nigeria proud on the global stage:

Disu holds a Bachelor of Arts in English from the Lagos State University (LASU) and a Master’s Degree in Public Administration from the Adekunle Ajasin University, Ondo State.

He has also attended several professional courses both at home and abroad, including Small Arms Smuggling Training in Botswana; Internet Fraud Training at Cambridge University, UK; Strategic Leadership Command Course at the Police Staff College, Jos; Forensic Investigations and Criminal Intelligence Course at the University of Lagos, amongst others.

The Inspector-General of Police, Usman Alkali Baba, appointed Disu as the Head of the Police Intelligence Response Team (IRT), on August 2, 2021 following the suspension of DCP Abba Kyari.

Disu is a former Commander of the Rapid Response Squad (RRS), Lagos State where he led a team that made several arrests of criminals, especially fraudsters.

He was at a time the Deputy Commissioner of Police, Department of Operations, Force Headquarters, Abuja.

Disu had also previously served at the State Criminal Investigation and Intelligence Department, Rivers State, as the second in command of the unit.

He was also a former commander of the Nigeria Police Contingent to the African Union (AU) Peace Keeping Mission in Darfur, Sudan.

He is a member of the International Association of Chiefs of Police, Nigeria Institute of Public Relations and Chattered Institute of Personnel Management, amongst other professional bodies.